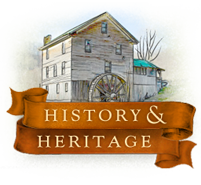 Pastors Randy Reinhardt (Covenant Community Church) and Fred Lessans (Living Water Fellowship) became closely associated in the mid-eighties in the context of a pastors’ prayer group that met regularly for prayer and mutual support. It was in this context that a growing friendship began to emerge.

Given our desire for more relationship between our two congregations, we began to  share  events together, i.e., picnics, Christmas Eve and Good Friday services. During this time, Randy and Fred also began meeting together for greater accountability and personal support  thus furthering  their brotherhood and preparing the way for what was to come.

Finally, in the summer of 1998, the Lord began to give further indication that He was calling the two congregations into a more profound relationship.

Upon returning home, Fred shared with Randy what he felt the Lord might be saying through this passage of Scripture. After more prayer and reflection, they initiated a process of prayer and consultation with the elders of each congregation as to whether God could be calling them together. A year later in August of 1999, a proposal to unite together was brought before the two congregations. Thus began a process of “courtship” to determine whether this was in fact God’s will and  direction.

During the next nine months we shared Sunday services, meals, fellowship times and social events in order to better discern God’s will and direction. After covering the entire process with much prayer, discussion and consultation with congregational members, we came to a mutual decision in the Spring of 2000 that God was indeed calling us to become one congregation. On June 1, 2000, we formalized our union as New Heritage Community – to the glory of God!

About Us
One New Man
© 2013 New Heritage Community All rights reserved.